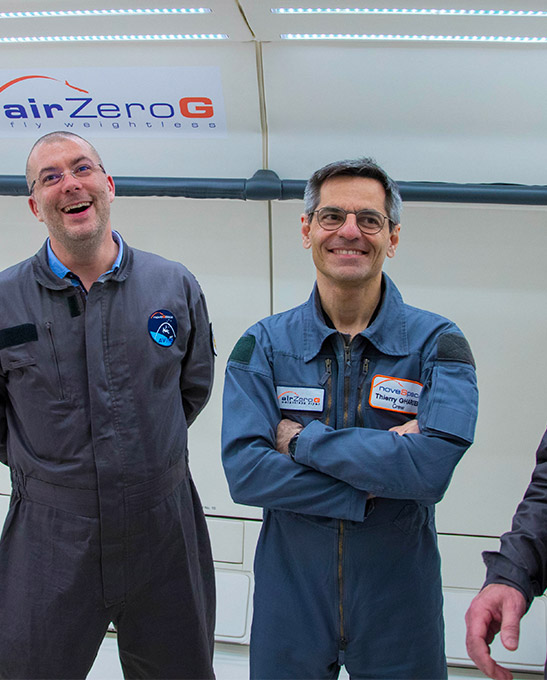 Thierry Gharib has been chief executive director of Novespace since 2011. Active in the sector since 1990, Thierry has managed the purchase and adaptation of successive Novespace aircraft: the A300 Zero G in 1997 and the A310 Zero G in 2015.

Thierry studied engineering at the French National School of Civil Aviation (ENAC) and is a graduate of EM Lyon business school.

Thierry worked in each Novespace business line before taking over its management, including the marketing of parabolic flights, supporting scientific teams, and organizing flight campaigns onboard various aircraft used by Novespace, including the Caravelle Zero G (DGA Flight Tests), KC-135 (NASA), and of course the Airbus A300 and A310 Zero G.

Thierry has also drawn up business plans on behalf of the French National Centre for Space Studies (CNES) and the European Space Agency (ESA), and managed the reentry observation program off the coast of Mexico and West Africa for the cryotechnic main stage of Ariane 5 using an airborne radar system fitted to the A310 Zero G.

“Working at Novespace is first and foremost about exceptional encounters with researchers, astronauts, pilots, artists, entrepreneurs, space history and aeronautics enthusiasts, and all of our engineers and technicians, who are professionals to their fingertips. It’s also about having unforgettable adventures, including weightlessness, of course, with the incredible emotion of my first parabolas still etched in my memory, supporting scientific research, an interest of mine since childhood and which lies at the heart of our business, the technical and administrative challenge of opening up flights to enthusiasts, the technical and financial adventure of buying and approving new aircraft, cooperation with players from the great space powers: the Americans, Chinese, Japanese… And just a few stories for the record: getting the airport reopened at night in Mexico before the Ariane 5 reentry observation with the help of a few bottles of Bordeaux, diverting the aircraft to Cotonou because of an uprising in Togo, and wandering around the port in search of a crane to conduct the mission… but above all, in August 2017, seeing the look of happiness in the eyes of teenagers with disabilities who had come to discover weightlessness, supported by our considerate and deeply moved team who made us prouder than ever!”