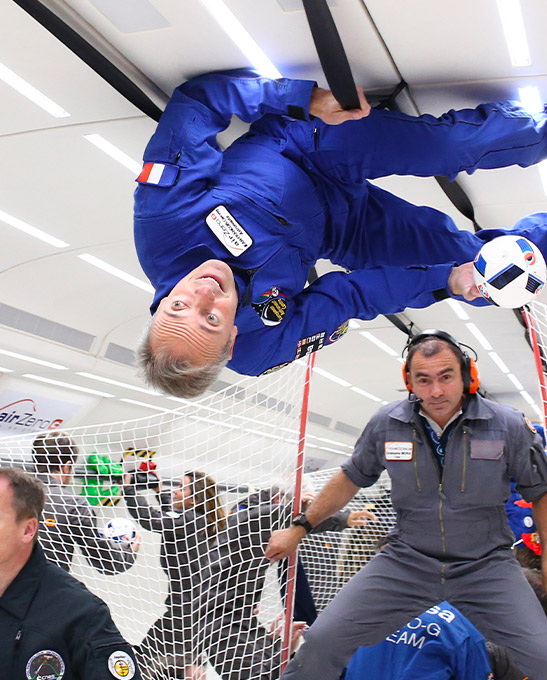 Jean-François Clervoy (JFC) is an astronaut with the European Space Agency (ESA) and President of Novespace. An Armaments General Engineer, he is currently a reservist with the French Ministry of Defense.

JFC is a graduate of the Ecole Polytechnique, the National Higher French Institute of Aeronautics and Space (ISAE-SUPAERO) and the French test pilot school (EPNER).

A career in space

Immediately after completing his studies at the Ecole Polytechnique, JFC asked to be posted by the Directorate-General of Armaments to the French National Center for Space Studies (CNES) to work on flight control systems for spacecraft.

Over the course of his career, JFC has become an expert in space technology, including in on-orbit rendez-vous and robotic operations, and related flight control interfaces. His responsibilities have included the design of on-orbit monitors for the international space station (ISS). In 2009, he was also a member of the selection panel and then coach for new European astronauts.

JFC has completed three space missions. He joined the mission on the space shuttle Atlantis in 1994 to study the atmosphere and in 1997 to resupply the Russian space station Mir, and in 1999 he joined Discovery as a member of the Hubble space telescope repair crew.  He has completed 439 terrestrial orbits at a variety of altitudes and orbital inclinations.

JFC was appointed chief flight engineer on the first scientific parabolic flights program in Europe, which he called “Zero-G”, and made weightless flights on Caravelle, Airbus A300, KC135 and Iliouchine 76 before joining the ESA and then NASA in 1992.

The program has since been delegated to Novespace. On his return to Europe in 2006, he was seconded part-time by the European Astronaut Centre as CEO of Novespace.

In 2013, he put his plans to open up parabolic flights to the public into practice. Novespace created the “Air Zero G” brand and JFC decided to take part in each flight alongside these “astronauts for a day” as he likes to call them!

To date, JFC has accumulated, on parabolic flights, the equivalent of 16 weightless terrestrial orbits and the equivalent of the Apollo 11 mission in lunar gravity. His favorite zero-gravity acrobatic feat consists in sitting upside down on the ceiling of the aircraft cabin.

He was also awarded the Aeronautics Medal. Member of several organizations that promote space travel and action on the environment, he has written a number of books and invented the Speedmaster Skywalker X33 watch for astronauts produced by Omega.