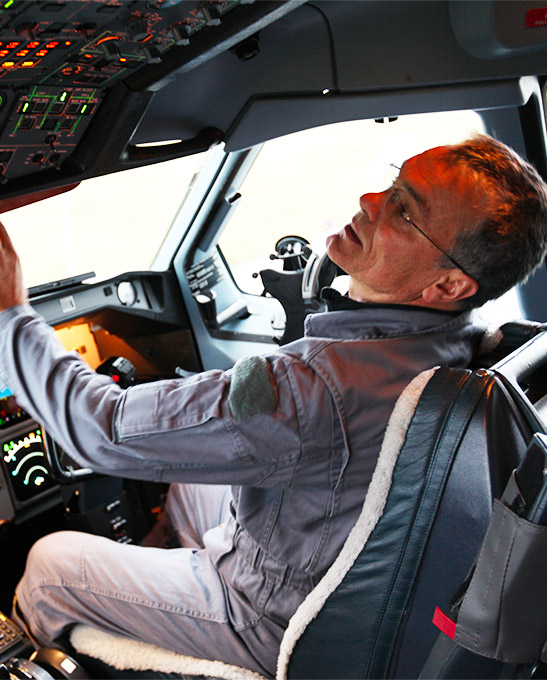 Test pilot at ATR, Loïc Bernard is Pilot-in-Command on the Novespace Airbus A310 Zero G.

Loïc Bernard joined the French air force shortly after passing his baccalaureate. He qualified as a fighter pilot in the T-33 in 1981. He spent his career as an air defense pilot in France (Mirage F1) and Africa (Mirage III). He joined the French test pilot school, EPNER in Istres, in 1994, with the aim of becoming a test pilot.

In 1997, he joined the ranks of the A300 Zero G test pilots as a pilot with the flight test center. Once he had completed his training, he piloted the aircraft until it was retired from service. In 2014, he took part in all of the qualification flights of the new Novespace aircraft, the A310 Zero G. Loïc Bernard is now one of Novespace’s pilots-in-command and has made more than 6,600 parabolas.

“Aeronautics is an ideal path for me”

Loïc owes his early love of aviation to his father, a bush pilot. His toy boxes were filled with Buck Danny annuals and model airplanes of all shapes and sizes.

At the age of 16 he trained as a glider pilot, a pastime he still enjoys. He achieved his dream at the age of 23 when he qualified as a fighter pilot. After a career spent in mostly peaceful skies, he became a test pilot at the age of 36.

When he was 38 he discovered the joys of parabolic flights, as a passenger and then, soon afterwards, as a pilot. At the age of 40, he left the military and joined the civil aviation industry within the Airbus Group.

Since he began his career in the aeronautics industry, Loïc has already flown more than 12,500 hours, on more than 90 types of aircraft, of varying degrees of complexity and heaviness. Some are a pilot’s dream (almost all the Mirages), while others are less so (Martin Baker MK IV with its ejector seat).

Today, he works as a test pilot with aircraft manufacturer ATR, and as such, is involved in the development and certification of new products, and the fine-tuning of aircraft that leave the assembly line.

His passion for heavier-than-air models has never left him. This explains why he regularly flies as pilot-in-command on board the Novespace Airbus A310 during his free time.