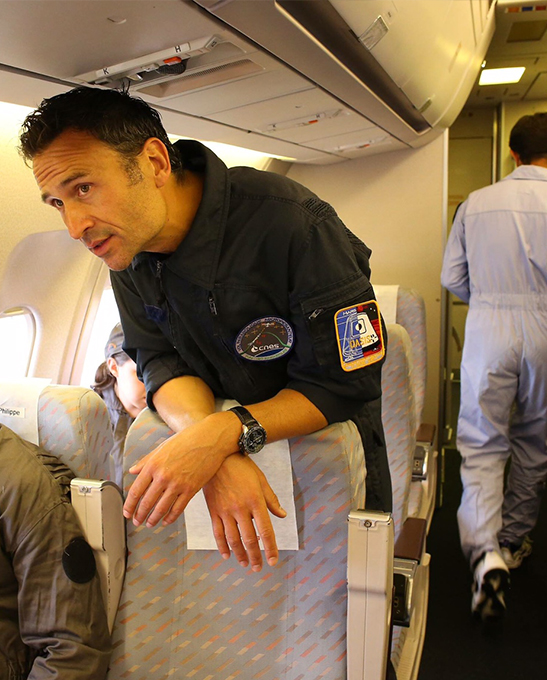 Qualified in aerospace medicine, Jeremy Saget is a parabolic flight physician and conducts helicopter relief missions in challenging areas for the United Nations.

His scientific knowledge covers a wide range of fields: besides a research Master’s degree in cognitive sciences and human factors, and another in “Mesophere Science” for the “Polar Suborbital Science in Upper Mesosphere” program supported by NASA, he is also certified by the Embry Riddle Aeronautical University to operate on board experiments on future suborbital flights.

He has been passionate about space since he was a boy and, in the last 20 years, by the challenges of a manned mission to Mars. He has written an essay on the subject for an anthology called “Touching the Face of the Cosmos” edited by Paul Levinson with a preface by John Glenn.

He also gives introductory talks on the social psychology of isolated missions and confinement in extreme environments, and the “popular space experience” – a subject close to the hearts of Zero G instructors and to Jean-François Clervoy.

“The space experience everyone can enjoy, from the Zero G to Mars!”

“Even the tiniest cell lives a waking dream to the full during a gravity-free flight. It’s an extraordinary experience: flight takes on a hitherto unknown meaning and even the most mature among us suddenly become children again. I’ll never get tired of seeing those smiles light up, linking two glimmering stars in eyes that shine with a shared joy that’s instantly unforgettable.  And when it comes to weightlessness, I weigh my words carefully!”

Jeremy Saget has been an instructor and flight physician on board the Airbus A310 Zero G for an accumulated equivalent of one gravity-free orbit (90 minutes), seven minutes of lunar walking and almost four minutes in martian gravity-free conditions!