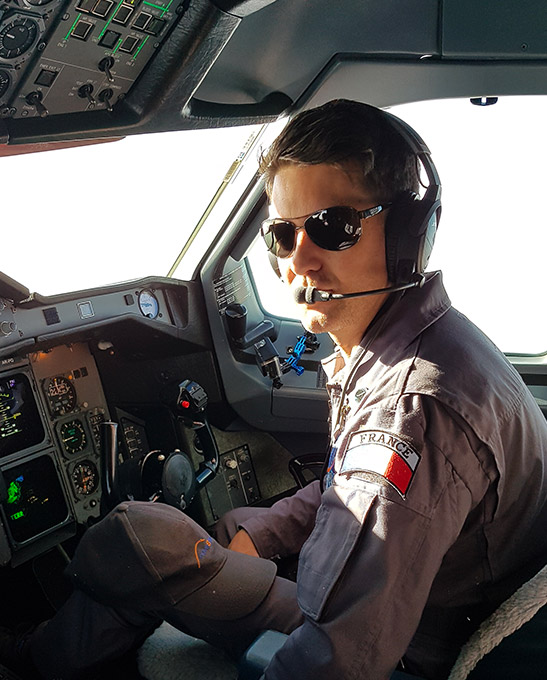 Transport pilot in the French air force for more than 20 years, Stéphane Borloz-Paradis-Vanier has always been passionate about flight, aeronautics in general and aerospace.

A qualified Airbus A310 pilot in the French air force since 2004, he has more than 7,000 flight hours to his name, including 4,300 in this type of aircraft. An A310 instructor at Airbus based in the Toulouse training center, he is also a DGAC-approved examiner.

Driven by his passion for discovery, he joined Novespace’s team of parabolic pilots in 2015, following the purchase of the A310 Zero G.

“Since I had the opportunity to become a pilot and to explore the three dimensions, each take-off, landing and flight is, for me, a fascinating dream turned reality. So when I have the privilege of doing parabolas with an airliner, and at the same time help the public discover these unique sensations, there’s only one thing I can say: my line of work is simply fascinating.”

“The sensations of space travel in an Airbus”

Stéphane was recruited from among the most experienced A310 pilots in France to become an Airbus Zero G pilot. And it was to the last French operator of this type of aircraft – the French air force – that Novespace turned to find him.

Stéphane has therefore been fully trained to fly air force transport planes, and qualified to pilot several types of aircraft since he obtained his pilot’s license in 1997. He has successively qualified as Pilot-in-Command, instructor and examiner on the A310 and, for the last two years, examiner controller.

He continues to work for the military as a member of the “Esterel” transport squadron, occasionally transporting the French prime minister as part of his duties, while also taking part in Novespace’s Zero G flight campaigns.