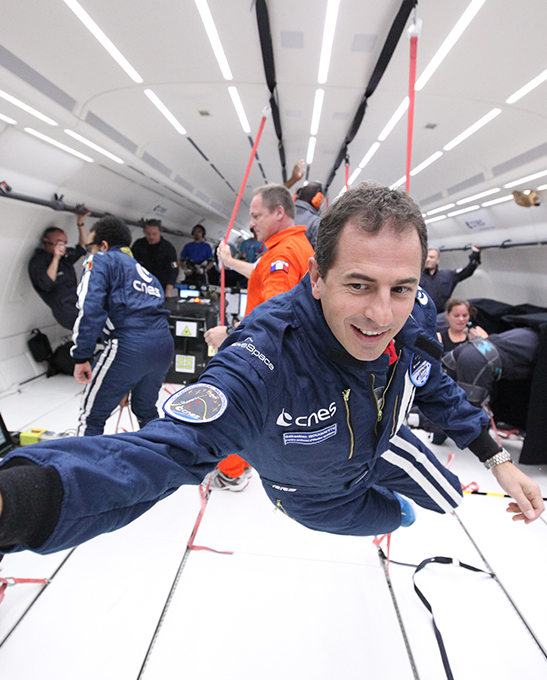 Doctor of astrophysics and planetology and manager of parabolic flight activities at the French National Center for Space Studies (CNES), Sébastien Rouquette shares his experience of weightlessness with you.

After completing his doctorate in October 2000, he joined the CNES and experienced his first parabola in September 2002.

He has been the parabolic flight project manager at the CNES since 2011. His job is to coordinate the selection of scientific experiments and to oversee the organization of flight campaigns.

He is also a member of the team responsible for developing and conducting experiments on the International Space Station (ISS), including for those on the Proxima mission, of which astronaut Thomas Pesquet was part. In this capacity, he was there when the French astronaut left our planet from the plains of Kazakhstan, and helped with mission outreach by regularly appearing at media events.

“I’m passionate about science, the sky and space”

A glider pilot and instructor and a volunteer science facilitator, he shares his passion for science, the sky and space with as many people as possible.

He has now performed nearly 3,000 parabolas, equivalent to more than 15 hours of weightlessness.

“What I like most about the flights is when the passengers all suddenly break out in smiles the moment they discover weightlessness. It’s like experiencing it for the first time all over again. And helping to create these extraordinary memories is amazingly uplifting.”

Like the rest of the Novespace team, Sébastien has long been a champion of making parabolic flights available to the general public. Since these plans were first put into practice in 2013, the flights have been as popular as ever. Sébastien divides his time between flights for CNES scientific campaigns for French research teams and discovery flights.

“It’s always a real pleasure to offer these ‘pretty original visits’ to our extraordinary laboratory. And it’s an honor to work within a team of people as varied, friendly and professional as this one.”