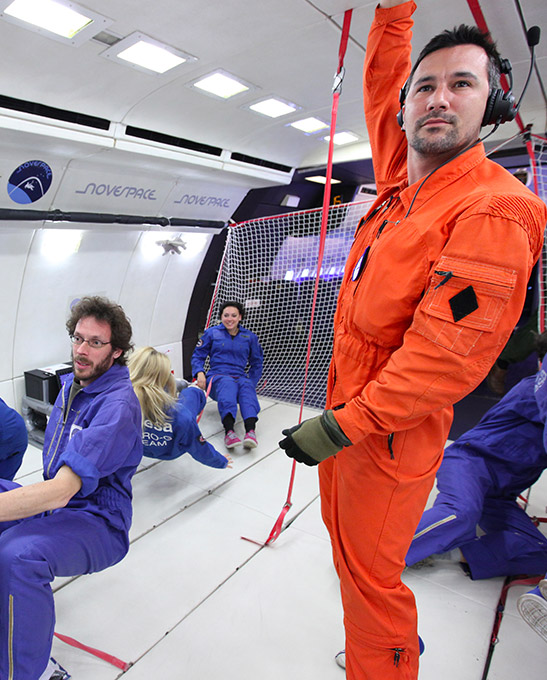 After studying at the French Ministry of Defense’s aeronautics institutes, Olivier entered the world of flight tests. He started out as an aircraft mechanic and then, after seven long years of evening courses at the National Conservatory of Arts and Crafts, he joined a design and engineering department as a mechanical designer.

He was promoted to the position of project manager and is now responsible for safety, rescue and parachuting flight tests. He is also a qualified private pilot and parachutist.

As a member of the Novespace team, he alternately works as a flight-attendant leader and flight safety officer.

“You have to be very disciplined and adapt to a variety of situations as an FSO on board the Zero G aircraft.”

He first boarded the A300 in 2001 to provide advice and criticism on the mechanical aspects of onboard experiments. It was while he was taking a discovery flight as part of this mission that he revealed his proficiency and poise under microgravity conditions.

Holder of an aircraft onboard safety certificate, he was made a flight-attendant leader in 2013. He has made more than 4,000 parabolas.

Franco-Venezuelan, Olivier shares his love between France and Venezuela. Familiar with life in several South American countries, his knowledge of Spanish and Latin culture makes it easy for him to reach out to others.

He earned EASA-145 certification for an aeronautics maintenance company in Venezuela for the first time in 2008.