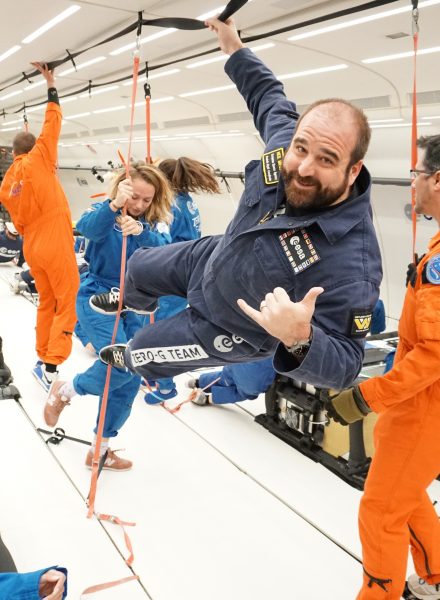 Neil has had a lifelong interest in space, and was selected to fly with us as a student back in 2001, whilst studying for his Masters in Physics and Philosophy at the University of York, UK.  After graduating he joined the European Space Agency, initially as a trainee, to build and fly the first student micro-satellite.  Over the next two decades he worked as a Systems Engineer developing experimental hardware to fly on the International Space Station, Sounding Rockets, and Russian Foton-M capsules.

In 2016 Neil took on the role of ESA’s Parabolic Flight Coordinator, and is now responsible for two or three Agency campaigns per year, regularly bringing many scientific, technological and educational payloads to fly on the A310 Zero-G.  His extensive weightless experience makes him a useful microgravity instructor, especially for our native English speaking passengers.  He joined the Air Zero-G team in 2018.

“If you do what you love, you'll never work a day in your life." (Marc Anthony)

“I’ve loved zero-g since the first time I flew as a student, so it’s great that my career has led me back to parabolic flight.  I thoroughly enjoy organising ESA’s campaigns, and welcoming such a wide variety of researchers into the field.  Having come ‘full-circle’, it is now a real pleasure to be able to offer the same opportunities I had to new students, and to all our Air Zero-G passengers.  I hope these experiences inspire similar journeys for others in the future.”