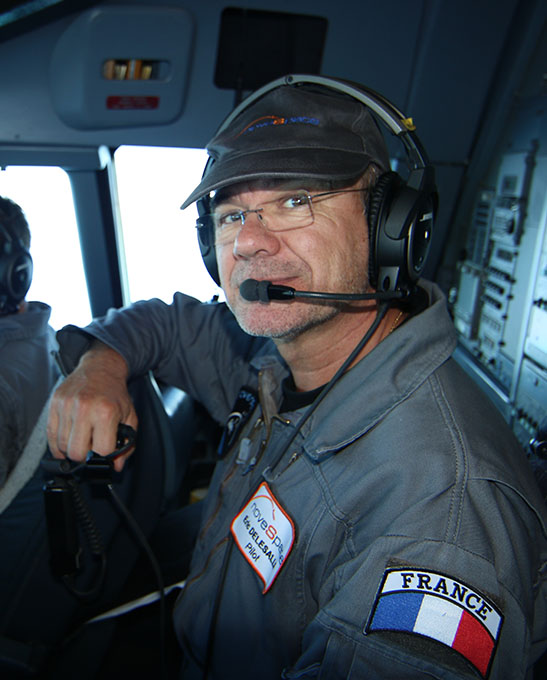 Eric Delesalle is an experimental test pilot, parabolic flight pilot on the A310 Zero-G, and head pilot at Novespace. He is also a flight test director at ATR.

“If you’re curious by nature, aeronautics is perfect because there are so many aspects to it – and there’s always something to discover!”

After a career as a fighter pilot, Eric Delesalle began working as a test pilot in the military before moving to the civil aviation sector with the Airbus Group.

Throughout his career, Eric has had the opportunity to fly in a huge range of aircraft: fighter and transport, jets and propellers, light and heavy, single-engined and multi-engined, single-seater and manned, military and civil; he has flown 8,500 hours in 80 different types of aircraft, from the ULM to the Rafale to the A380.

“Aeronautics in all its variety”

Eric Delesalle now runs aircraft manufacturer ATR’s Flight Tests Department where he’s involved in the development and certification of new products, and fine-tunes aircraft once they leave the assembly line; Eric has special responsibility for the risk management of flight activity focused on flight envelope limits.

Eric Delesalle graduated in engineering from the Ecole de l’Air – a military school for training line officers in the French Air Force – in 1979. He began his career as a fighter pilot in the Mirage F1 in Rheims, where he commanded an air defense squadron.

After this initial experience in a high-performance aircraft, Eric decided to deepen his theoretical knowledge and took a break from flying to study for an engineering degree at the National Higher French Institute of Aeronautics and Space in 1989, before joining EPNER, the French test pilot school, in Istres, southern France.

Acutely aware of the importance of the Human Factor (HF) in aircraft cockpits, in 2012 Eric earned a university degree in HF, specializing in the design of human-systems interfaces in aeronautics.

Eric is now an HF expert and uses his experience to help aviation companies develop and certify new systems.

Eric’s interest in the human angle sometimes goes beyond technology, and he enjoys supporting humanitarian causes through aeronautics, and two charities in particular – Aviation sans Frontières and Rêves de Gosse.

When the Airbus A300B ZeroG left the EADS Sogerma workshops in 1996, Eric conducted the aircraft’s first test flight after it was modified for parabolic flight.

This provided Eric with an opportunity to discover parabolic flight – a new field requiring precision piloting and meticulous crew coordination.

“This two-fold challenge is what makes this field so interesting and I’m just as enthusiastic about it as I was twenty years ago!”

When the Airbus A300B was retired in 2014 and replaced by an A310, and Novespace took on operations previously delegated to the Flights Test Centre (CEV), Eric Delesalle was given responsibility for running the new aircraft’s test category rides and managing a team of six pilots.

Eric Delesalle has now made more than 7,000 parabolas.